Somali president “Mohamed Abdullahi Farmaajo”: has made admissions on military excesses in Somaliland under the era of former president Siad Barre.

His comments on Thursday came three days after what Mogadishu called an “ice-breaking” meeting with Somaliland president Muse Bihi. The meeting in Addis Ababa was brokered by the Ethiopian Prime minister Abiy Ahmed.

Speaking at a judicial conference on Thursday, Farmaajo averred that the civil war didn’t start in 1991 but well before that claiming many lives in northern regions (Somaliland).

“We are here now, what is needed is where we go from here, it is go towards justice. What is needed is acknowledgment in seeking forgiveness for the bad things that have happened, to correct the dark chapter in our history, which means to express regret for the suffering in the north.

“To express regret, to apologize to our brothers, those who died and those maimed, to say to them that what happened was bad history, it is in the past. Indeed what happened there was not like the south invading the north, it was not based on clan, it was a government system that existed at the time.

“As the head of State, to express regret, and to convey our apologies to our northern brothers and you join in that regard with me.”

The admission by the president who faces reelection later this year received mixed reactions on Twitter. Some people are quick to point out that he is not the first president to apologize, that his predecessor Hassan Sheikh Mohamud is on record to have made similar admissions.

Whiles some say an admission is not an apology, others hold that it is a bold first step and an official apology will likely follow in due course.

I welcome President Farmajo’s apology over the massacres committed by the former military regime against our brothers in Somaliland in the name of our nation. We demand to apologise the killing of the soldiers at Wadajir Party HQ who were buried in a mass grave under his rule.

108 people are talking about this

This will not bring back the hundred thousand killed and millions displaced but its its very good step, and milestone for the somaliland-somalia talks. I have underlined in my yesterday interview the difficulties to talk to genocide deniers and sympathizers. #Somaliland #Somalia https://twitter.com/Gobannimo/status/1227921825092571137 …

Finally president of #Somalia @M_Farmaajo have admitted there has been genocide committed against people of #Somaliland and asked for forgiveness. Very good step, have been campaigning for this, its difficult to talk while there is no recognition of what has happened.

24 people are talking about this 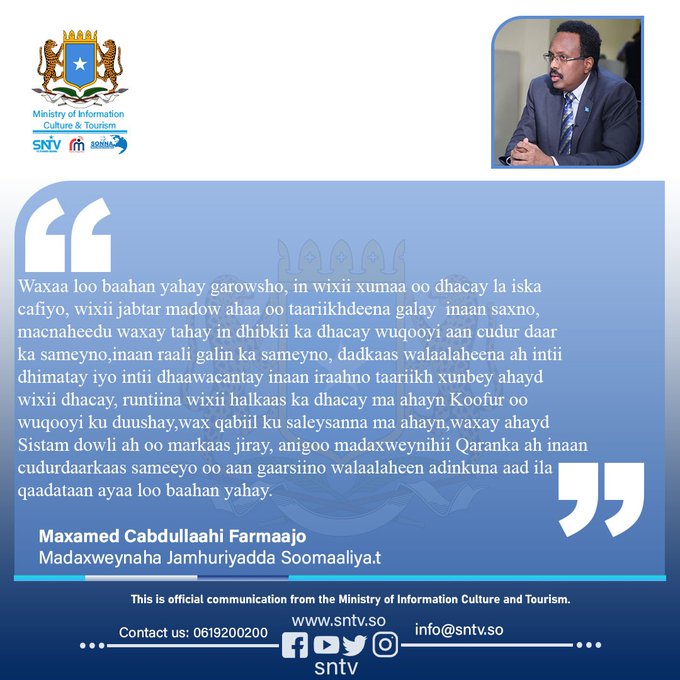 116 people are talking about this

@M_Farmaajo state apology is indeed a important step, but the easy part of the equation.

Finding hearts & minds to accept will be most difficult.

I pray our bro/sis in Sland can find the courage to finally begin a healing process. #Somalia

Can someone help me understand the word ‘Cudurdaar’? It has been a while since I attended Somali language courses. Farmaajo’s statement is incoherent, hence doesn’t qualify for an apology. For the record, SNM won’t apologize for shit! @ShaqaleZak @MDuale1 https://twitter.com/thebhlub/status/1227929853346897920 …

About the Hargeisa Holocaust: Pulitzer Center

This year marks the 32nd anniversary of what is referred to as the “Hargeisa Holocaust.” Hargeisa is the capital of Somaliland which is globally considered a semi-autonomous region of Somalia. They continue to push for international recognition till date.

The Pulitzer Center in a 2018 article on the circumstances around Mogadishu’s crackdown on Somaliland wrote: “Between 1987 and 1989, the regime of Somali dictator Siad Barre massacred an estimated 200,000 members of the Isaaq tribe, the largest clan group in the northwest part of Somalia.

“At the time, some Isaaqs were fighting for independence, and to eliminate the threat, Barre tried to exterminate all of them. Experts now say there are more than 200 mass graves in Somaliland, most of them in the Valley of Death.”

The report continues: “about 90 percent of the city was destroyed and tens of thousands of Isaaqs were killed. Yet there are no major plans to mark the horrors in Somaliland, or anywhere else for that matter. In the past, a few international organizations have recognized the bloodletting.

It added that a 2001 UN report investigating the attacks against the Isaaqs concluded that “the crime of genocide was conceived, planned and perpetrated by the Somalia Government against the Isaaq people of northern Somalia.”

Education initiative reaches more than 300,000 disadvantaged children in Rakhine and...

NZ to help fund fight against measles in the Pacific region

StreetScore scores a street view based on how safe it looks...

UN agencies facilitate the integration of Malian refugees in Mauritania

SpringFest One Fashion Show at the University of Michigan

Xbox One to launch in China this month after all

US resumes talks with Taliban in Doha: US source

ABOUT US
Aya Multimedia is your business, news, entertainment, music fashion website. We provide you with the latest breaking news and videos straight from the globe. You are welcome with your contribution to sponsor us to explore more of what we have not covered.
Contact us: ayamultimedia1@gmail.com
FOLLOW US
© All Right Reserved | Copyright 2020 | Aya Multimedia
MORE STORIES

What did Africans ask Google in 2019?